The “New Europe” and Controversy around the European Idea

Who belongs to Europe? And when we say ‘Europe’, what exactly do we mean?
Such questions are the subject of controversy all over Europe and beyond. The idea of Europe as a community and the European Union as a supranational and intergovernmental community of states have so far been, and still remain, important frames of reference.
In cooperation with local stakeholders from the Eastern Partnership Countries, as well as with partners from the Central Europe Project, Whose Europe? identified and devised various forms of interaction at the local, national, and European levels, specifying their effects and then publishing the outcomes. Thus, making them accessible throughout Europe and beyond but also putting them up for review in their original local contexts.
In the cities and regions of Eastern Europe, the parallel processes of reconstituting a national identity and Europeanisation (i.e. forging a European identity in the context of EU membership) have sparked fierce debates with regards to the European question(s): How does it relate to the respective history and (re)consti- tution of each country’s national identity? How can it contribute to forging complex identities? Particularly in cities with artists, activists, and urban planners among others who are vehemently committed to the democratic and European reorientation of their societies and have founded democratically enlightened civic initiatives. What could be considered the common ground for a European “civic society”?

Please find more information on the project here: Whose Europe? The “New Europe” and Controversy around the European Idea. International Conference, Local Discussions and Interventions. 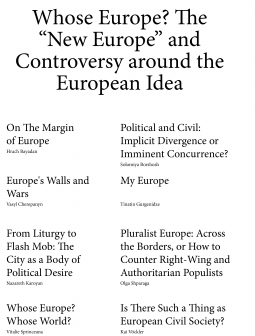