The story of the book on the public art activity of János Sugár goes back to 2006, and even earlier, to 1993, to his Sztriptíz [Striptease] project. His plan to cast in bronze the graffiti Sztriptiz —spayed on the wall of a building in Budapest, most probably in the 1980s—was made first in 1993 for the exhibition Polyphony: Social Commentary in Contemporary Hungarian Art. After it fell through, Sugár’s Sztriptíz project was the winner of tranzit.hu’s open call Unrealized Art Projects in 2006. Yet, due again to the failed attempt to obtain the necessary permissions, the plan remained to be unrealized in the 2000s as well. After this, the idea of a book emerged that collects Sugár’s works and projects, which—similarly to Sztriptíz—are made primarily not for an art public but the urban, public space.

The Hungarian and English language book PST (Public – Street – Tactical). The Public Art Practice of János Sugár, published by tranzit.hu, endeavors, on the one hand, to contextualize Sugár’s public art practice within an international framework, considering also local specificities. On the other hand, to look at all of his initiatives that connect to the umbrella term PST, reinterpreting also such works from the 1980s as Fast Culture or the Persian Walk. 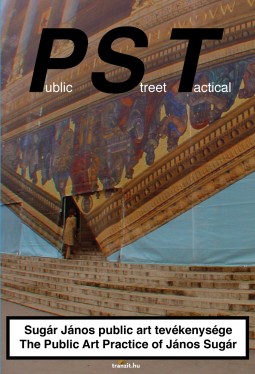