Notes on Contemporary Art in Kosovo

This publication collects writings on the art scene of Kosovo over the past 20 years.
In the 1990s Kosovars felt—as many other countries in the Balkan region did—the urgency to shape their own scene: in a search for identity, for nation building, in continuing or ending political conflicts, by trying to find a language to grasp recent social and political developments, or simply by continuing their practice in new, unstable times.
This collection of writings and interviews tries to offer insights into these processes through various perspectives (from curators, artists and philosophers) on the latest fundaments of artistic developments and further fosters reflection on how a local, prospering scene continuously raises new questions, and addresses undiscovered topics, hand in hand with the region’s historical struggles while building/being the youngest state within Europe.

Notes on Contemporary Art in Kosovo is published in the context of the tranzit.at Glossary Series which aims to encourage reflection on possible new and different approaches to creating common knowledge, more in sync with our time than the prevalent epistemological models, focusing on the new global conditions—and on the fact that we require more equality in creating knowledge under these conditions—as well as the need to redefine artistic geographies so that they can attune themselves to this new situation. 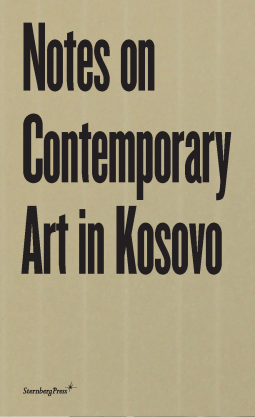