Lukáš Jasanský and Martin Polák are among the most highly respected living Czech photographers. They express themselves through extensive cycles of photographs that until now have only been documented separately in smaller catalogues featuring only extracts of their work. A larger overview and assessment of their work has been missing. Both artists express themselves through a conceptual type of photography based on typological series, the paradoxes of the photographic image, and the performative character of joint creation. The all-pervasive irony and deadpan humour of Jasanský and Polák bear witness not only to the properties of photography as a medium, but to life in Eastern Europe over the last few decades. The publication includes 1,363 photographs and is the first foreign-language book that comprehensively records the history of all the cycles of this photographic duo. It is being published in collaboration with the Swiss publishing house JRP-Ringier.

Notes
This is the 9th volume of “tranzit series“, focusing on Central and Eastern European artists (Edited by Vít Havránek, Editorial Coordination by Lionel Bovier). 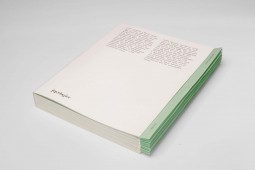