Catalogue is part of the EXPERIMENT exhibition at tranzit.sk.

Robert Cyprich (September 13, 1951 Levoča – October 14, 1996 Prague) was an unusual member of the Slovak neo-avant-garde scene. His life was intense, although in his final years his involvement in artistic activities dwindled. He died in 1996 at the age of forty-five.
He left behind poems, texts, drawings, concepts, scores, manifests, actions, and correspondence. The exhibition project entitled Experiment provides access to a segment of his estate preserved by Czech artist and curator Ján Mlčoch. It is not in any way a monographic presentation, but an attempt to highlight significant examples of his search for the meaning of artistic work in communication.

Besides the curatorial texts, the catalogue contains a detailed list of the exhibited works and an imaginary interview with Robert Cyprich, made up from citations from his correspondence with J. H. Kocman, Petr Štembera, Tomáš Štrauss and Radislav Matuštík from the 1970s. 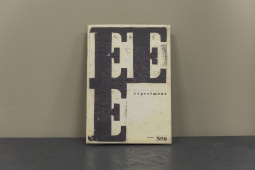