CORNER approaches football from an interdisciplinary perspective, focusing on context and language. The cover and the poster belong to Mi Kafchin, two images which question the perception of sport and identity representation.

Bogdan Ghiu continues his micro-series on the phenomenon of the ”new stadium” and writes about the relay-man in the society of the spectacle and Anca Verona Mihuleț develops the dialectics of the football-specific language in an interview with Dumitru Graur. Staring from the history of the Maccabi Bucharest team, Claudiu Revnic develops the subject of ethnic teams and the role they played in the build-up of communities.

Declan Clarke develops a text (to be continued in the next issues) about the history of modern football and the translation of socialism in football tactics.

James Montague, the author of ”The Billionaires Club” (Bloomsbury Sport, 2017) presents an episode from his research about labour and slavery on the stadium of a future World Championship.

Mihnea Anțilă writes about minor football, small self-organized teams and ways to infiltrate rhizomatically the structure of big football. This material is illustrated with a guide to set-up a football team. 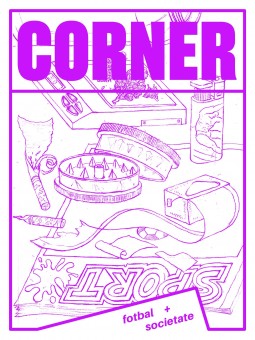