Brian O´Doherty: Inside the White Cube
The Ideology of the Gallery Space

Few essays have garnered as much immediate response as Brian O’Doherty’s “Inside the White Cube,” originally published as a series of three articles in Artforum in 1976, and subsequently collected in a book of the same name.1 According to myth, the issues of Artforum containing O’Doherty’s texts sold out very quickly, and as he himself has remarked, many artists he spoke to at the time told him that they themselves had been thinking about writing something similar. This is to say that the main concern of the essay—how to deal with the white cube convention for gallery design—was shared by many of his contemporaries.

O'Doherty was the first to explicitly confront a particular crisis in postwar art as he sought to examine the assumptions on which the modern commercial and museum gallery was based. Concerned with the complex and sophisticated relationship between economics, social context, and aesthetics as represented in the contested space of the art gallery, he raises the question of how artists must construe their work in relation to the gallery space and system.

Naturally, O’Doherty was writing not only within the specific context of post-minimalism and conceptual art of the 1970s, but also from the point of view of artistic practice. Aside from being a prominent critic, O’Doherty was also an installation artist, having worked since 1972 under the name of Patrick Ireland (in protest against the British Army’s involvement in Ulster). As both theorist and practitioner, insider and outsider, he was not in a bad position to examine the ideology of something as peculiar as the modern gallery space, the much loved and maligned “white cube.”

These essays are essential reading for anyone interested in the history and issues of postwar art in Europe and the United States. Teeming with ideas, relentless in their pursuit of contradiction and paradox, they exhibit both the understanding of the artist (Patrick Ireland) and the precision of the scholar.

Having Brian O'Doherty's provocative essays available in Czech is a signal event for the Czech art scene. This edition also includes "The Gallery as Gesture," a critically important piece published ten years after the others. 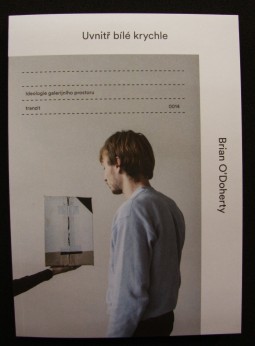