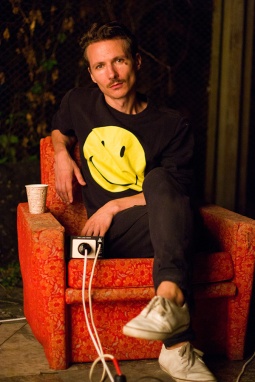 I want to work on a screenplay, which I then want to draw as a graphic novel, and also make a TV series I am currently working on the script for the fantasy horror series " Uncanny". The story takes place in a parallel universe. After the collapse of the Soviet Union, a generation later, people began to notice that their children had various superpowers that disappeared at the age of 18. There are various theories as to why this happened, from conspiracy theories to the effects of radiation in connection with the Chernobyl tragedy, but none of them have been confirmed. In 2022, Russia attacks Ukraine. The peculiarity of this war is the mass and merciless killings of all, without exception, children from birth to 17 years of age. Martial law is declared in the country and parents take their children to other countries en masse. According to military laws, it is forbidden for men aged 18-60 to travel abroad. Single father Anatoly and his 11-year-old daughter Katya, who has super powers, also try to evacuate to another country, but Anatoly is not the official guardian of Katya, which makes all efforts to leave the country impossible, and suddenly Anatoliy receives an offer from an unfamiliar foreign curator to leave with his daughter for an art residence in Chicago, through the diplomatic corridor. Without thinking, Anatoly accepts the invitation and they leave for America together without any obstacles. Upon arrival, the father and daughter learn that "good Russians" helped them. These are liberal, anti-Putin, queer-friendly people who have already helped many "untypical" families with children leave Ukraine. Very soon it turns out that the residence is primarily a super-school that develops children's super-abilities. The volunteers who maintain this residence believe that with the help of their school, the children will learn to use their gift, thanks to which it will not disappear in the future, and with the joint efforts of all the students of the school, the end of the war will be possible sooner. But the further Kata and her father Anatoliy have more questions about this school and this small secluded society, which is more like a sect from which it seems impossible to escape.
I started writing the story of my script about queer parenthood back in 2017, based on my experience as a parent, because I am raising a 12-year-old daughter on my own. The military invasion of Russia on February 24 of this year introduced new meanings and themes into our lives, thanks to which the history of the scenario also underwent changes. At this point, I only have an idea for the script of the series and a short synopsis of it. But I know what I would like to talk about in this fantastic and scary story, I want to talk about new and old problems of Ukrainian society, which this war so decisively manifested. For example, about the invisibility of queer families in Ukraine, about unprotected childhood during the war, about the surreal life-survival in a country in which the laws of peaceful life temporarily cease to apply and new laws of war appear. One of the main themes of the series is the separation of Ukraine from the influence of the Russian Empire, as well as the detection of pro-imperial blindness, including among "good Russians" in the matter of Ukraine, its history, subjectivity and independence from the Russian context. Talk about whether there are really "good Russians"?
In addition to writing a script for a horror story, I will also draw and work on creating my new music. I have some sketches that I drew during my stay in Ukraine after February 24, and some of them I want to draw in a larger format and new material. I also want to draw some pictures for my script. visualize some episodes from it.