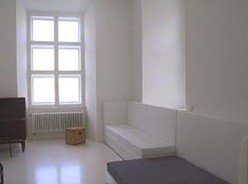 The Artist in Residence Programme at Q21/MuseumsQuartier in Vienna (MQ AiR) is part of ERSTE Foundation’s and tranzit’s long-termed endeavour to support contemporary art and to strengthen the fragile situation of its creators, especially in the region of Central, Eastern and Southeastern Europe.
From 2019 on, the MQ AiR programme will include two more institutions: Igor Zabel Association (IZA) and Kontakt. Art Collection. Kontakt will collaborate with the Zagreb based WHW Akademija.

The residencies are designed for artists, curators and theoreticians from Czech Republic, Hungary, Romania, Slovak Republic, Slovenia and Croatia working in the field of contemporary art to do research in their respective area. The research character of the residence should make it possible to take a break from the everyday strenuous production pressure and find time to concentrate on a specific interest. The participants are given the opportunity to live and work for the period of two months in one of the Q21 studios at MuseumsQuartier right in the heart of Vienna. Each residence grants a monthly stipend of EUR 1050,-.

tranzit is a network of five independent, non-profit organisations in Austria, Czech Republic, Hungary, Romania and Slovak Republic. Since 2002, tranzit has been developing artistic and cultural activities with a critical approach, fostering a permanent dialogue between local and global culture.
tranzit serves as a platform which aims to inform all those who are active in the international art world about the developments of the contemporary art scene in Central and Eastern Europe. When selecting the program contents, priority is given to the exchange of ideas between artists, curators, art critics and all those interested in art.

Since 2019 two more institutions are involved:
Igor Zabel Association (IZA) for Culture and Theory was founded in 2008 by Zabel family members and ERSTE Foundation. The association’s objective is to work with the heritage of Igor Zabel (an influential Slovene curator and art historian, 1958–2005), highlight and evaluate the importance of his work, especially the work he performed in the field of visual arts, as well as to put Zabel's work in a dialogue with current questions and phenomena in the field of contemporary art, specially by supporting art history and theory as well as curatorial practice in the Central, Eastern and South-Eastern Europe and beyond.

Kontakt. Art Collection. was evaluated by a research team and aimed the existing art collections of Erste Group’s members in 2002 and, based on their findings, developed a unified concept which laid the cornerstone for the present Kontakt collection. Kontakt is dedicated to making visible the art scene of the regions which it “explores,” as well as making an attempt at establishing a comprehensive body of works which can serve as an archive for research and exhibition-making.